The Importance of Progressions

The Importance of Progressions

Progression is an important aspect of becoming successful not only in Gymnastics, but also in life. We should all strive to better ourselves, both mentally and physically in multiple aspects of our lives. Without some sort of progression, we would remain stagnant, or worse, our skill sets that we’ve developed throughout our lives would begin to decline. What do we consider progress? Can we identify what is progression and what is regression? Do we need to be able to identify between the two, or can others do that for us?

Let’s identify what we consider progress. Progress is defined as “A forward or onward movement toward a destination.” In gymnastics, we perform many repetitive movements over and over again, building up muscle memory to perform those repetitive movements almost effortlessly. From an outside perspective, it may appear that no progress is being made, however this is not the case. Learning this muscle memory prepares not only the body for more challenging movements, but also conditions the mind to be ready for the next skill.   In time, this eventually turns into more challenging skills, which is when the progression is normally perceived to an untrained eye.

One thing I love about gymnastics is that nearly everything taught from an introductory level becomes a building block for skills later on. The forward roll, cartwheel, and handstand are all used over and over again, even though the complexity of the movement may change. Skipping these progressive steps rarely works. I have personally tried skipping steps of learning a skill before, and I have always gone back and reworked each progression to create the final skill. Following these steps prevents you from hitting a plateau and becoming stagnant.

Our program here at Barron Gymnastics does a very good job of recognizing these progressive skills. Students are required to master a skill before earning a star for that skill, meaning they must not only perform the skill once, but multiple times with success. These skills aren’t thrown out of the program once mastered. Students will continue to work on these skills while learning new ones, and that is not a bad thing. Continuing to practice skills that they have mastered continues to help their muscle memory, strengthens them to get ready for the next skill, and reduces their chance of injury. This is part of the reason why all of our classes follow the same lesson plan, and repeat skills throughout their lesson plans.

Now, how can you identify whether you’re progressing or regressing? That can be difficult to tell without a trained eye. When a gymnast is repetitively performing the same skill with minimal mistakes and nuances, that is one form of progression. Another occurs when they advance through difficulty levels, learning a more challenging version of a skill or progressing from one level to the next. When moving from one level to the next, progression may appear to slow or even halt. Usually this is due to a new difficulty level of skills being introduced, and can take varying amounts of time to adjust to depending on each individual child. Another possibility is that a child was progressed too quickly and needs to go back and work on the easier pieces of skills until they are actually ready to move forward. This is something we strive to avoid at all costs because it can lead to a feeling of failure, which is a feeling we never want to induce as gymnastics coaches.

The following video includes a list of progressions that I use when teaching athletes a double back tuck. This includes many skills from an introductory beginner level all the way up to an athlete being ready to perform such a difficult skill. This list starts with basic skills such as a seat drop, candlestick roll, and backward tuck roll.

Chances are, we could not take an athlete that can perform the end result here without also being capable of performing every single one of the lead-up drills.

As coaches, we take on the responsibility of understanding a safe progression path for each skill we teach and prepare for students that progress at different speeds. We must understand that some children may progress quicker than others, and some children may need an extra detailed step in between skills to help bridge the gap. In no way does my above video cover every possible progression path or drill for teaching a double back tuck. Using these concepts, we can create a complex or simple path of progression for nearly every skill we plan to teach.

From a parent’s perspective, recognizing progression can be important as well. Noticing when your child is advancing in a skill they have clearly been working hard at can be a big compliment to them at the end of a practice. You also may realize if your child isn’t progressing, this could be because of a number of scenarios. Potentially your child needs something different to do in the gym, or he or she needs some extra practice either at home or via some extra open workouts to reinforce what they are attempting to learn.

In the end, recognizing and achieving progression is an important part of both gymnastics and building a strong foundation for life. Help celebrate each gymnast’s individual success and help support them through their struggles as they challenge themselves each day. Train safe. 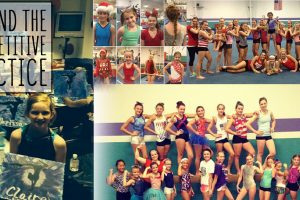 Beyond the Competitive Practice 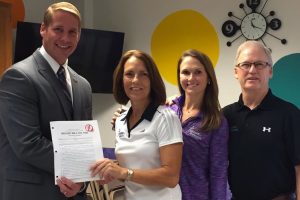 Many states have passed rulings, policies and laws that have negatively affected the way we run our businesses. 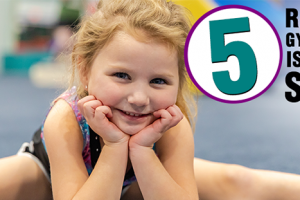 5 Reasons Gymnastics Is A Great Sport | by owner, Julie Barron

I cannot remember a time when I was not involved[...]